To offer you this article for free we receive a small affiliate commission if you chose to buy through our links. Click here to learn more.

Does your search for the perfect yoga towel make you feel like throwing in the towel?

There’s an abundance of brands out there, but not all of them are created equally.

The best yoga towels don’t slip or bunch up, and they absorb like sponges. Since they cost more than your average bath towel, it makes sense to do some shopping around before settling on a brand.

If you’re in the habit of bringing a regular towel from home to your yoga class, you’ll be surprised by the difference between a terrycloth bath towel and a towel that’s specifically designed for use during yoga.

**Below, you'll find our hand-tested reviews, but you can also click the links above to see current prices or read customer reviews on Amazon.

Why use a yoga towel?​

A yoga mat towel is a great addition to your workout gear collection. The top reason, especially if you’re a hot yoga practitioner, is that they absorb sweat.

Do you know that if you weighed yourself before and after a yoga class, you’d often find that you weigh less afterward? It's possible to lose up to 1.5 liters of water during one hot yoga class.

Much of those 1.5 liters of sweat will wind up on your yoga mat. That's a problem because a wet yoga mat is a slippery yoga mat, and if you're like me, you don't want to face-plant during downward dog.

Using an absorbent yoga towel can take some anxiety out of your hot yoga class because with a good one, you'll know there’s less chance of slipping and sliding on your mat.​

Yoga towels are engineered to allow for more grip than a pad or mat alone. They’re typically made of microfiber materials that become even more ‘grippy’ as they get wet.

Moreover, unlike a beach towel, they’re designed to stay in place. Some yoga towels come with sleeves or bands that help them to attach to the yoga mat to stay put during an entire vigorous workout.

Others have rubber nubs on their undersides that help to keep them in place. All this adds up to increased safety and stability during your workout.​

3: They protect against germs.​

Fitness facilities' practices of cleaning yoga mats vary widely. Since the rise of popularity in yoga, doctors have seen a spike in the number of patients suffering from contagious conditions like athlete’s foot and plantar warts.

If you’re using a yoga mat provided by the studio or gym, putting your yoga towel over that mat can help to ensure proper hygiene.

There are products like yoga mat wipes and hand and foot mitts that you can wear, but it makes sense to simplify the process by bringing a clean yoga towel with you when you're using a shared mat.

Using yoga towels is also an excellent way to keep your own mats clean and in good condition.​

Regular towels are poorly suited to yoga class. Towels made for yoga have non-skid surfaces on both sides; this provides needed stability and safety. Bath or beach towels will bunch up and slide around. Who wants to waste precious class time adjusting and readjusting their towel?

Yoga towels are sized to fit over mats precisely and to stay in place. Some types feature small rubber grips on one side to give added skid proofing.

They also are much better at absorbing sweat than bath towels, which is particularly appreciated by Bikram and hot yoga practitioners. They also provide more cushioning than ordinary towels.​

How to use a yoga towel​

All you have to do is place the towel on your mat. You want it to cover the mat only and not spill over the edges; this allows you to have precision with your yoga positioning.

Some yogis recommend sprinkling water on the towel before starting to exercise for improved grip. After class, just throw your towel into the washing machine and then tumble or air dry.​

What makes one yoga towel different from another?

The best yoga towels have their own patented materials that make the feel, grip and absorbency of their towels stand out from their competitors.

Others provide a means of attaching their towels to pads and mats that other towels simply don't have. Thicknesses, sizes and color options also vary.

Not just for Yoga

You don’t have to save your yoga towel for yoga class only. Since they’re exceptionally absorbent, they’re ideal companions for any fitness class.

They also dry quickly, so you’re not left with heavy, soggy fabric when you're done working out.

Some folks even use their towels in a pinch when a mat or pad isn’t available since yoga towels provide softness as well as grip and stability.

Most yoga studios or gyms that offer yoga classes sell yoga towels. You can also find them online and at sporting goods stores.

These towels are available in a broad spectrum of colors, thicknesses and fabric blends. The cost for the best yoga towels ranges from about $20 to $60.

I actually prefer to buy everything on Amazon - because...well...it is so easy.​

Ok now let's have a look at the yoga towels I liked best during my test.

**Below, you'll find our hand-tested reviews, but you can also click the links above to see current prices or read customer reviews on Amazon. 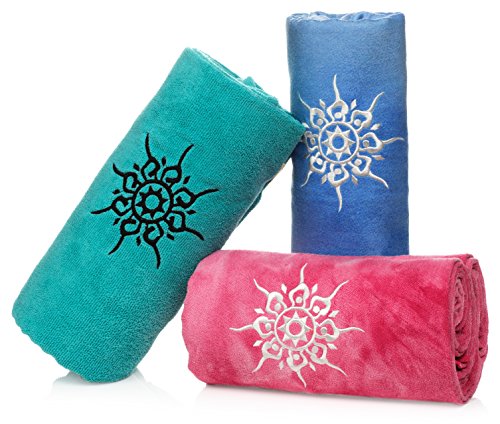 NamaSTAY sets itself apart from its competitors not just with its clever name.

It's the only hot yoga towel that attaches to your mat. 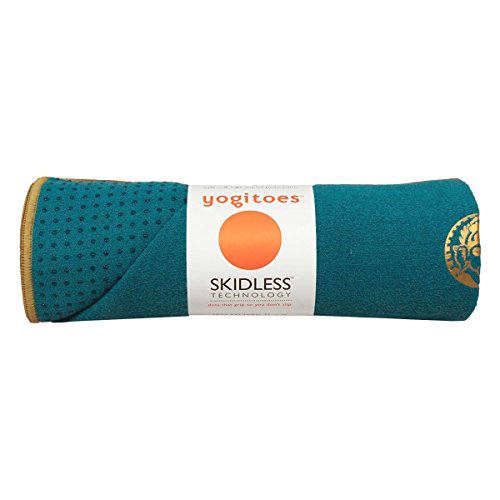 Yogitoes is perhaps the Rolls Royce of yoga towels. It’s a top-selling brand with rave reviews that’s been around since 2002, but it’s also one of the most expensive yoga towels out there, weighing in at a hefty $64 retail. 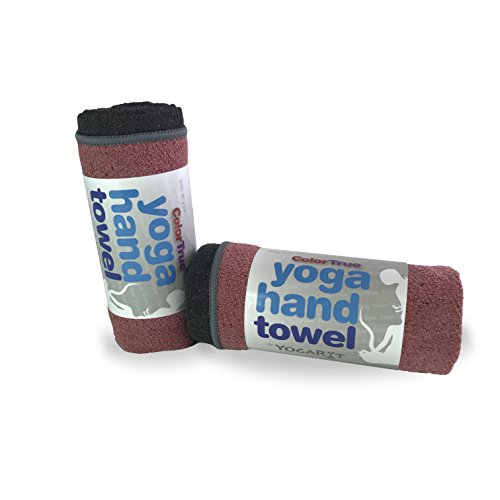 With a name like The Yoga Towel, you’d think this must be the yoga towel of choice. However, it seems like that might depend on what you plan to use this towel for.

It’s not equally suited to both vigorous and chilled-out exercise. 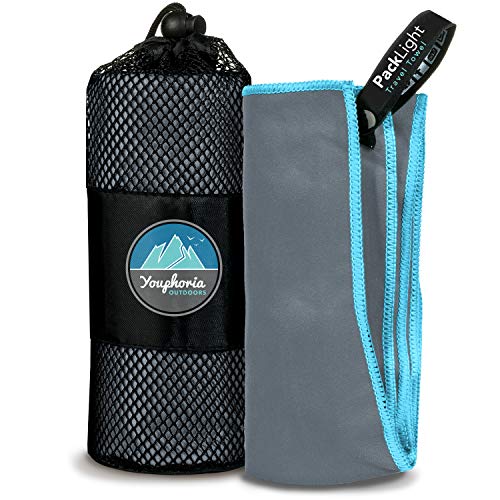 I’ve heard this towel described as a replica of the microfiber towel you’d find in the automotive section but bigger.

Well, I suppose they are both made from the same soft and super-absorbent material.

This towel has many happy customers, which is what places it on this list of best yoga towels. 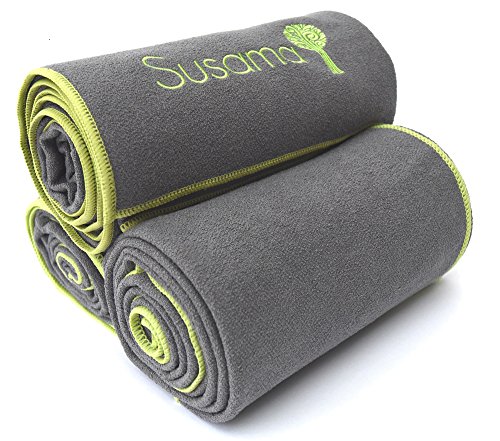 Last update on 2019-11-26 at 18:48  - More InfoProduct prices and availability are accurate as of the date/time indicated and are subject to change. Any price and availability information displayed on Amazon.com at the time of purchase will apply to the purchase of this product." / Affiliate links / Images from Amazon Product Advertising API

Susama seems to be a company that focuses on simplicity. While some yoga towel makers offer a delightful assortment of colors or sizes, Susama offers only one size and one color yoga towel.

Instead of investing in variety, they seem to invest in marketing and customer service.

For example, they’re one of the few yoga towel companies I’ve seen that offers free shipping with a purchase of two, and they also include what they call a ‘sports book’ with your purchase.

The best of the best yoga towels

I wish I could say my choice of best yoga towel was a little-known, dirt-cheap underdog. However, once you get past the sticker shock, there really are no drawbacks to Yogitoes.

They come in a large selection of attractive colors and prints, they have nubs on the undersides to make sure they stay in place no matter what surface you have them on, and they're highly absorbent.

Throw in the fact that each of these towels contains the equivalent of eight recycled plastic bottles, and the decision is easy.

The only minus with Yogitoes is you have to watch out for color bleeding the first few times you wash them, and that's only due to the safety of the dyes they contain.

I think it's worth it to spend more for a high-quality towel like Yogitoes; you can be confident your towel won't budge or bunch during your yoga routine.

So, what do you think? What is your favorite yoga towel? Any recommendations? Let us know in the comments!​

This site uses Akismet to reduce spam. Learn how your comment data is processed. 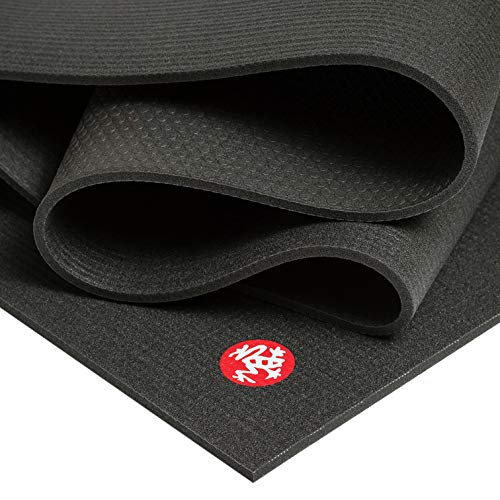 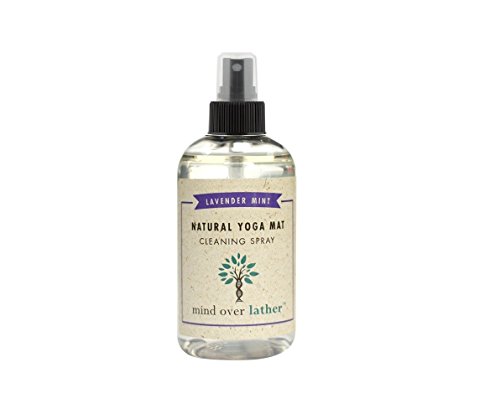 Last update on 2019-11-26 at 16:17  - More InfoProduct prices and availability are accurate as of the date/time indicated and are subject to change. Any price and availability information displayed on Amazon.com at the time of purchase will apply to the purchase of this product." / Affiliate links / Images from Amazon Product Advertising API

Somuchyoga.com is a participant in the Amazon Services LLC Associates Program, an affiliate advertising program designed to provide a means for sites to earn advertising fees by advertising and linking to Amazon.com.

Additionally, www.somuchyoga.com participates in various other affiliate programs, and we sometimes get a commission through purchases made through our links. We may receive products for free for review.

Amazon, the Amazon logo and the Prime logo are trademarks of Amazon.com, Inc. or its affiliates.

We use cookies to ensure that we give you the best experience on our website. If you continue to use this site we will assume that you are happy with it.OkRead more